The source of truth in the system

An Event is a serializable representation of “a fact that has happened within your system”.

An event is a change (fact) within our system. The event itself contains all the relevant information concerning the change. At its simplest, an event can be represented by a name (type) if it’s enough to describe the change.

More usually, it is a simple Data Transfer Object (DTO) that contains state and properties that describe the change. It does not contain any calculations or behavior.

As the event has happened, it cannot be changed, rejected, or deleted. This forms the basis of Event Sourcing If you wish to change the action or the state change that the event encapsulates, then it is necessary to initiate an action that results in another event that nullifies the impact of the first event.

This is common in accounting, for example: Sally adds 100$ into her bank, which would result in an event like “Add 100$ to Sally’s account”. But if the bank accidentally adds 1000$ instead of the 100$ then a correcting event should be played, like “Subtract 900$ from Sally’s account”. And with event sourcing, this information is preserved in the event store for eg. later auditing purposes.

To indicate that the event “has happened in the past”, it should be named as a verb in the past tense. Often it can contain the name of the entity that the change or action is affecting.

An event represents something interesting that you wish to capture in your system. Instead of seeing state changes and actions as side effects, they are explicitly modeled within the system and captured within the name, state and shape of our Event.

An event should be expressed in language that makes sense in the domain, also known as Ubiquitous Language. You should avoid overly technical/CRUD-like events where such terms are not used in the domain.

For example, in the domain of opening up the kitchen for the day and adding a new item to the menu:

Main structure of an Event

This is a simplified structure of the main parts of an event. For the Runtime, the event is only a JSON-string which is saved into the Event Store.

For the whole structure of an event as defined in protobuf, please check Contracts.

This is the content of the to be committed. It needs to be serializable to JSON.

This is the events position in the Event Log. It uniquely identifies the event.

Private events are only accessible within a single Tenant so that an event committed for one tenant cannot be handled outside of that tenant.

Extra caution should be paid to changing public events so as not to break other microservices consuming those events. We’re developing strategies to working with changes in your events and microservices.

An EventType is the combination of an EventTypeId to uniquely identify the type of event it is and the event type’s Generation. This decouples the event from a programming language and enables the renaming of events as the domain language evolves.

For the Runtime, the event is just a JSON-string. It doesn’t know about the event’s content, properties, or type (in its respective programming language). The Runtime saves the event to the event log and from that point the event is ready to be processed by the EventHandlers & Filters. For this event to be serialized to JSON and then deserialized back to a type that the client’s filters and event handlers understand, an event type is required.

This diagram shows us a simplified view of committing a single event with the type of DishPrepared. The Runtime receives the event, and sends it back to us to be handled. Without the event type, the SDK wouldn’t know how to deserialize the JSON message coming from the Runtime. 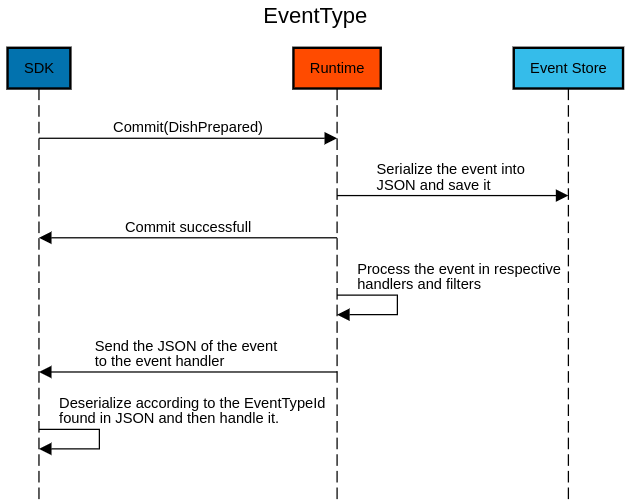 Why not use class/type names instead of GUIDs?

When consuming events from other microservices it’s important to remember that they name things according to their own domain and conventions.

GUIDs also solve the problem of having duplicate names, it’s not hard to imagine having to have multiple events with the type of CustomerRegisterd in your code coming from different microservices.

Generations are still under development. At the moment they are best to be left alone.

As the code changes, the structures and contents of your events are also bound to change at some point. In most scenarios, you will see that you need to add more information to events. These iterations on the same event type are called generations. Whenever you add or change a property in an event, the generation should be incremented to reflect that it’s a new version of the event. This way the filters and handlers can handle different generations of an event.