Overview of Event Sourcing in the Dolittle Platform

Event Sourcing is an approach that derives the current state of an application from the sequential Events that have happened within the application. These events are stored to an append-only Event Store that acts as a record for all state changes in the system.

Events are facts and Event Sourcing is based on the incremental accretion of knowledge about our application / domain. Events in the log cannot be changed or deleted. They represent things that have happened. Thus, in the absence of a time machine, they cannot be made to un-happen.

Here’s an overview of Event Sourcing: 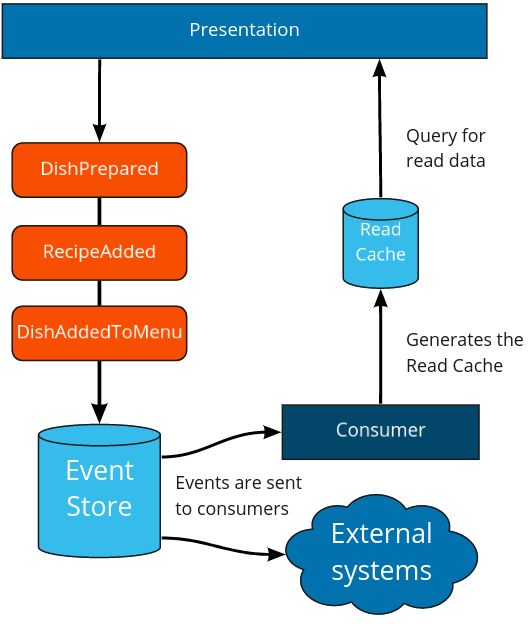 A traditional model of dealing with data in applications is CRUD (create, read, update, delete). A typical example is to read data from the database, modify it, and update the current state of the data. Simple enough, but it has some limitations:

The Event Store defines how the events are written in the system, it does not define or prescribe how things are read or interpreted. Committed events will be made available to any potential subscribers, which can process the events in any way they require. One common scenario is to update a read model/cache of one or multiple views, also known as a projections or materialized view. As the Event Store is not ideal for querying data, a prepopulated view that reacts to changes is used instead. Dolittle has no built-in support for a specific style of projection as the requirements for that are out of scope of the platform.

To negate the effect of an Event that has happened, another Event has to occur that reverses the effect. This can be seen in any mature Accounting domain where the Ledger is an immutable event store or journal. Entries in the ledger cannot be changed. The current balance can be derived at any point by accumulating all the changes (entries) that have been made and summing them up (credits and debts). In the case of mistakes, an explicit correcting action would be made to fix the ledger.

By capturing all changes in the forms of events and modeling the why of the change (in the form of the event itself), an Event Sourced system keeps as much information as possible.

A common example is of a e-shopping that wants to test a theory:

In a traditional CRUD system, where only the state of the shopping cart (or worse, completed orders) is captured, this hypothesis is hard to test. We do not have any knowledge that an item was added to the cart, then removed.

On the other hand, in an Event Sourced system where we have events like ItemAddedToCart and ItemRemovedFromCart, we can look back in time and check exactly how many people had an item in their cart at some point and did not buy it, subsequently did. This requires no change to the production system and no time to wait to gather sufficient data.

When creating an Event Sourced system we should not assume that we know the business value of all the data that the system generates, or that we always make well-informed decisions for what data to keep and what to discard.